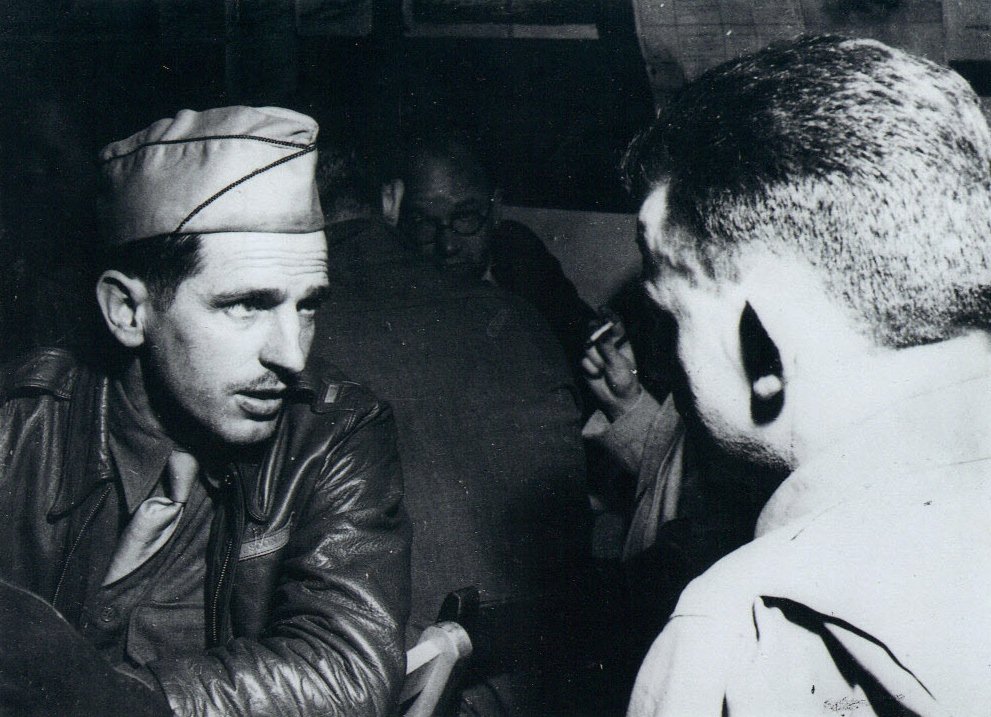 Lt. Sconiers is debriefed after a bombing mission.

The Time Has Come – Motto of the 97th Bomb Group

Two lives crossed sixty-eight years ago. One was highly-decorated 1st Lt. Ewart T. Sconiers, who had washed out of flight training, ending his aspiration to become a pilot. As a B-17 bombardier, he was on the first American bombing raid into the E.T.O. on August 17, 1942, soaring in the skies over Rouen, France. Just four days later, a formation of twelve B-17s including his plane, the “Johnny Reb” of the 97th Bomb Group, 414th Bomb Squadron, was slated to attack a shipyard in Rotterdam, Holland. Sconiers’ plane, lagging behind the others in the formation, was savagely attacked by German Luftwaffe FW-190 fighters. Despite being out numbered five-to-one, the crew shot down or damaged twelve enemy fighters before receiving a cannon shell hit through the right windscreen instantly killing Co-pilot, 2nd Lt. Donald Walters. The shell destroyed most of the cockpit, blew out the top turret and badly burned the 1st Pilot, 2nd Lt. Richard F. Sparks. 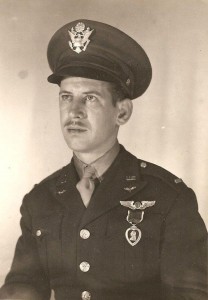 Sconiers scrambled from his bombardier’s position to the cockpit to find a half-conscious pilot, whose arm was nearly torn off. Although Sconiers had never flown a B-17 before, he moved the body of the dead co-pilot and eased himself into the seat. With great determination and only minimal instruction from Sparks, Sconiers flew the crippled bomber across the English Channel and made a perfect belly landing at Horsham St. Faith, saving the remaining crew.

For that miraculous feat, Sconiers was awarded a Distinguished Service Cross (DSC), and it was rumored that he was mentioned in one of FDR’s “Fireside Chats.”  Sconiers, a Purple Heart recipient, continued to successfully fly more missions. However, it was the October 21, 1942, raid on the sub pens at Lorient, France, that would prove to be his undoing. After bailing out of his crippled Flying Fortress, Lt. Sconiers was taken prisoner of war and sent to Stalag Luft III, the camp that would later become the site of the “Great Escape.” 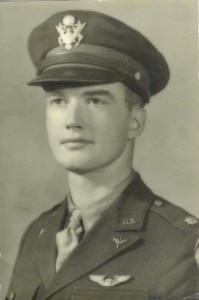 The other man in this story came straight out of West Point. Dashing Albert P. “Bub” Clark, a lieutenant colonel at the age of twenty-seven, was the first U.S. Army Air Force officer to be confined at Stalag Luft III. As the war progressed, he would prove to be a rock to his men under the most adverse of circumstances. Clark got into the war early as Deputy Group Commander of the 31st Fighter Group, the first American Fighter unit to fly operationally in the E.T.O. To gain combat experience, he flew Spitfires with the Royal Air Force.  On July 26, 1942, Lt. Colonel Clark’s mission was to Abbeville, France, when four FW-190s attacked. Gunfire was exchanged, and the four German fighters closed in to finish him off. Racing back low across the English Channel, the Spitfire’s engine began to sputter. Clark knew the Spit was notorious for not ditching well, so he opted to bail out. But when he pulled the emergency lanyard on the canopy, it broke off in his hand.  Before his engine finally died, Clark frantically searched for a place to land. Skimming along slowly, just five feet above the water, he hoped the plane would make it back to England. Soon he approached the shoreline, where the southeast coast of England and the west coast of France came very close together. Clark made his final approach, but instead of landing safely in Dover, England, the plane crash landed at Cape Gris-Nez, France. The young American pilot was captured immediately, and the German soldiers led him away.

After interrogation, Clark was taken to Stalag Luft III, where he became Senior American Officer and “Big S” (Security) in North Compound living with the RAF prisoners. Lt. Sconiers would join him in North Compound three months later.  Working side-by-side with the British, Clark supervised operations that aided in the digging of tunnels and planning of escape activities. He worked closely with, Roger Bushell, the senior RAF officer and mastermind of the “Great Escape,” and recruited hundreds of men to maintain the secrecy of the tunnel and contingent operations. One of those men in his employ was Lt. Ewart Sconiers.

But neither man would have the opportunity to take part in the “Great Escape.” Well-founded German suspicions that the Americans were helping the RAF in tunneling activities convinced the commandant of the camp, Colonel Friedrich Wilhelm von Lindeiner, to move the Americans out of North Compound.

It was in South Compound, where Clark and Sconiers resided, where a freak accident set in motion repercussions that have lasted six decades. About fourteen months after capture, Sconiers purportedly slipped on ice in the compound during the winter of 1943, and a piece of wood ruptured his ear drum. Shortly afterward, he complained to Clark of an earache. With no adequate drugs to treat an ear infection, Sconiers’ condition worsened. As December eased into January of 1944, marking another milestone for both prisoners, Sconiers developed further complications. It appeared that the infection entered his brain, and soon he was displaying symptoms of mental illness, consistent with the spread of severe infection. His roommates tried to protect him from the increasingly ominous attention of the German guards, but while the prisoners were out of the barracks one day, the Germans took Sconiers away. He was taken about an hour from the camp to a Reserve Hospital in what is now Lubin, Poland. He died there the next day, January 24, 1944. Some Germans claimed he had a heart attack. Others claimed he had pneumonia. Albert Clark did not believe either explanation.

On  January 27, 1944, a solemn burial party including Lt. Col. Clark and  Lt. Milton Stenstrom, Sconiers’ pilot on their final mission, arrived by train in Lubin.  In the POW section of the city cemetery, Grave Number 7, Lt. Ewart T. Sconiers was laid to rest in what was then enemy soil. An American flag covered his casket, and a wreath of flowers displaying swastikas at the end of its ribbons sat atop the flag. 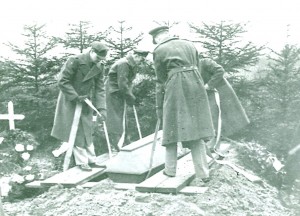 Lt. General Clark, former superintendent of the United States Air Force Academy in Colorado Springs, had expressed to me when I once interviewed him, the revulsion he felt as he watched a muddy German boot stomp upon the American flag that covered Lt. Sconiers’ casket as the wooden box was lowered into the ground. It is a memory that never left him. Clark and Sconiers’ fellow POWs saluted their friend that cold gray day and returned to Stalag Luft III. 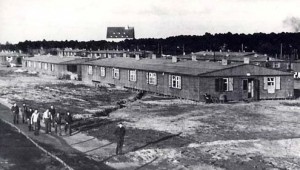 One year later to the day, Stalag Luft III was evacuated as 10,000 POWs embarked on the Forced March just ahead of the Russians. Smoke arose from Hut 104 in North Compound where the escape tunnel “Harry” had originated—a fire set as a final act of defiance from the British and in retribution for the murder of “The Fifty” by the Gestapo. The camp stood completely empty.

Three months later, the war ended, and jubilant men returned home to resume their interrupted lives. U.S. Army Graves Registration eventually located the graves of the POWs buried at Stalag Luft III and another POW from the camp buried in another nearby town.  All the remains were brought home.  But Lt. Sconiers’ body was never located. After the war the border changed, and Lubin was then in Poland. In the years that followed, the town of Lubin was subjugated by Communist rule, and search teams were very restricted in their efforts to search for Lt. Sconiers. 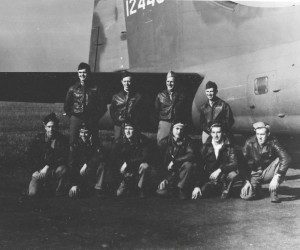 Lt. Sconiers with crew, back row, second from right

Only recently has the Defense Prisoner of War / Missing Personnel Office (DPMO) reopened the case of Lt. Sconiers. Dedicated to the proposition that America “always brings her own home,” a research team was organized, headed by Navy Chief Petty Officer John Gray. Working with local officials, including Polish researcher Szymon Serwatka, the team relentlessly searched for Lt. Sconiers grave. The search proved to be even more difficult since the post-war Communists converted the cemetery into a public park, removing all grave markers. But there at the foot of a catalpa tree, no more than sixteen yards from a paved city street, coordinates indicate the likely grave of Lt. Sconiers. According to locals, a friend came and planted the tree, which is native to Florida, Lt. Sconiers’ home state. To this day, the planter of that tree has remained a mystery.

An American living in Poland, Stephen Marks, currently works in the building that was the former mental hospital where Sconiers was taken. He became interested in the story after seeing a memorial near the park dedicated to Sconiers and all allied POWs and posted an inquiry about Sconiers online. 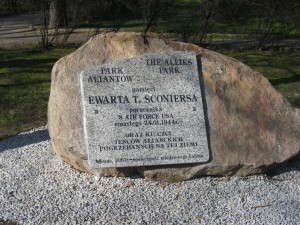 From the people of Lubin: Memorial to Lt. Sconiers and all allied POWs

A Polish historian and professor in Lubin, Mr. Stanislaw Tokarczuk, led the city’s effort to establish the memorial, and Mrs. Stefania Saracen, a citizen of Lubin, adopted the grave years ago and has ever since kept vigil there.

Until the present, we who worked with Chief Gray were convinced that all of Sconiers’ relatives were deceased. However, one day Pamela Sconiers Whitelock, Lt. Sconiers’ niece, decided to “Google” his name on her computer. She was suddenly flooded with researchers’ names she had never heard of before and stunned to find so many had been working on her uncle’s case for years. From Pamela we soon learned the Sconiers family had always believed Sconiers died in an escape attempt and had been thrown into a mass grave. In her possession was a box of Sconiers’ meager possessions, including a deep burgundy-colored plastic cross.

The passion of those who remain dedicated to bringing Lt. Sconiers home has been phenomenal.  WWII researcher and historian, Ed Reniere of Belgium, has worked tirelessly in assisting in this quest, and Szymon Serwatka now wears Sconiers’ burgundy cross around his neck. Chief Petty Officer Gray wears a bracelet marked with the name Sconiers on it that he will give to Pamela when the case is closed. Bruce Norfleet, an award-winning producer/director, formerly of the National Geographic Channel, plans to create a documentary about Lt. Sconiers. Sadly, in Colorado Springs, 96-year-old Lt. General Clark, who for so long awaited word of the date that Joint Prisoners of War / Missing in Action Accounting Command* (JPAC) planned for the exhumation of the grave and the return of Lt. Sconiers’ remains to the United States, died in 2010.

Sconiers is the only American Stalag Luft III POW that has not come home. For nearly eight years, the case of Lt. Sconiers has consumed me. From the hand-written map of the cemetery area that Gen. Clark drew for me from memory to give to DPMO, to the day-to-day contact with all those who care about Lt. Sconiers, I have followed every step. As the daughter of a former Air Force colonel and ex-Stalag Luft III POW, I have felt an ever-lasting bond with the Stalag Luft III community.  This journey has made that special bond stronger and even more meaningful.

Last January, I returned to site of Stalag Luft III, and I took a side trip to stand at the grave of Lt. Sconiers on the anniversary of his burial. Upon reaching the gravesite, I quietly whispered to him that his niece, Pamela, had been found, and she was going to bring him home.   Shortly afterward, Pamela also visited his grave.  Hopefully soon, her uncle will be returned to his native Florida to be re-buried beside his mother and the door will be closed on this case after sixty-eight years.

Pam at her uncle’s grave in Poland

In my past conversations with Gen. Clark, his anticipation was palpable. It is no exaggeration for me to say that after all the years he had waited, it would have given me the greatest of pleasures to finally look him in the eye, smile broadly and tell Gen. Clark…..”He’s coming home.”  We who have worked for this cause for so long will not let the late general down.