An angel of the Lord appeared to them, and the glory of the Lord shone around them, and they were terrified. But the angel said to them, “Do not be afraid. I bring you good news of great joy that will be for all the people. Today in the town of David a Savior has been born to you; he is Christ the Lord. This will be a sign to you: You will find a baby wrapped in cloths and lying in a manger.” Suddenly a great company of the heavenly host appeared with the angel, praising God and saying,

“Glory to God in the highest, and on earth peace, good will toward men.” 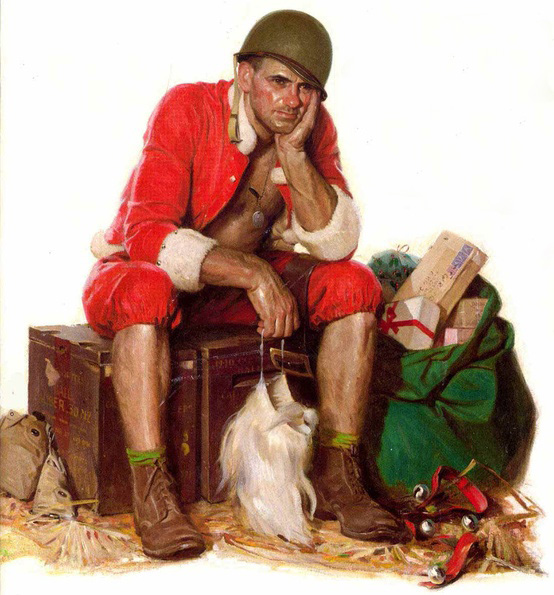 A 1944 painting is of a WWII Marine taking a break
from playing Santa Claus and delivering gifts to the troops.

The World War II years included six Christmases from the war’s beginning on September 1, 1939 through the surrender of Japan in August of 1945.  The U.S. was not a declared combatant during the first two years, but was an active participant through the support of the Allies in the “Battle of the Atlantic.” We subsequently entered the war after the attack on Pearl Harbor by Imperial Japan 18 days before Christmas of 1941.  Four Christmas seasons were celebrated under the specter of war by thousands of U.S. servicemen and women serving abroad with the whole nation supporting them from the home front.

The Manhattan Project was authorized by President Roosevelt, a few days after Christmas of 1942.  The culmination of this decision was the development of the A-Bomb which brought the war to an end in August of 1945.

On Christmas Eve of 1943, Dwight Eisenhower was made Supreme Allied Commander.  This appointment led to the successful invasion of Europe at Normandy, France, 6 months later on June 6, 1944.

In the Fall of 1944, Bing Crosby toured Allied Air Bases in England. 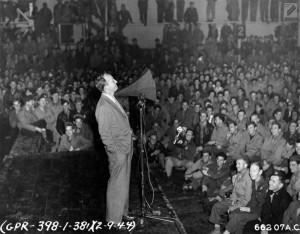 He was then at the height of his ever growing popularity and even though Christmas was 3 months away, his singing of “White Christmas” and “I’ll Be Home for Christmas” were the highlights of his every stop.  On September 2, 1944, he performed a concert at the Airbase for the 381st Bomb Group in Ridgewell, England. The 381st didn’t fly a mission that day, so the entire base filled Hangar 1, where the concert was held.   The enthusiastic airmen and ground staff literally hung from the rafters, showing their enthusiasm for his singing and the message of his two iconic Christmas songs with raucous shouts and applause. (See the included photographs). The previous night he had sung at the Stage Door Canteen, a popular London hangout for Allied troops. 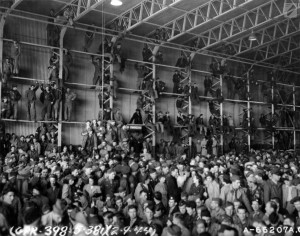 Irving Berlin’s classic “White Christmas” was first sung, publicly by Crosby on the NBC Radio show “The Kraft Music Hall” on Christmas Day 1941.  Crosby later recorded “I’ll Be Home For Christmas” in October of 1943.  Both became instant hits and remain so today, with “White Christmas” being the best selling single recording of all time.

As we sing these ever popular songs of nostalgia each Christmas, we should remember the thousands of service men who sang them during WW2, each dreaming, hoping and praying to be returned to their homes safely, quickly…and victorious.  Many were not.  The U.S. lost close to 500,000 during WW2.  The 381st at Ridgewell alone lost  691 servicemen during WW2…many of these men were present at the Crosby concert in 1944.

We pray that our nation will return to God, whose son’s birth we celebrate on Christmas, and that he will bless the United States of America.