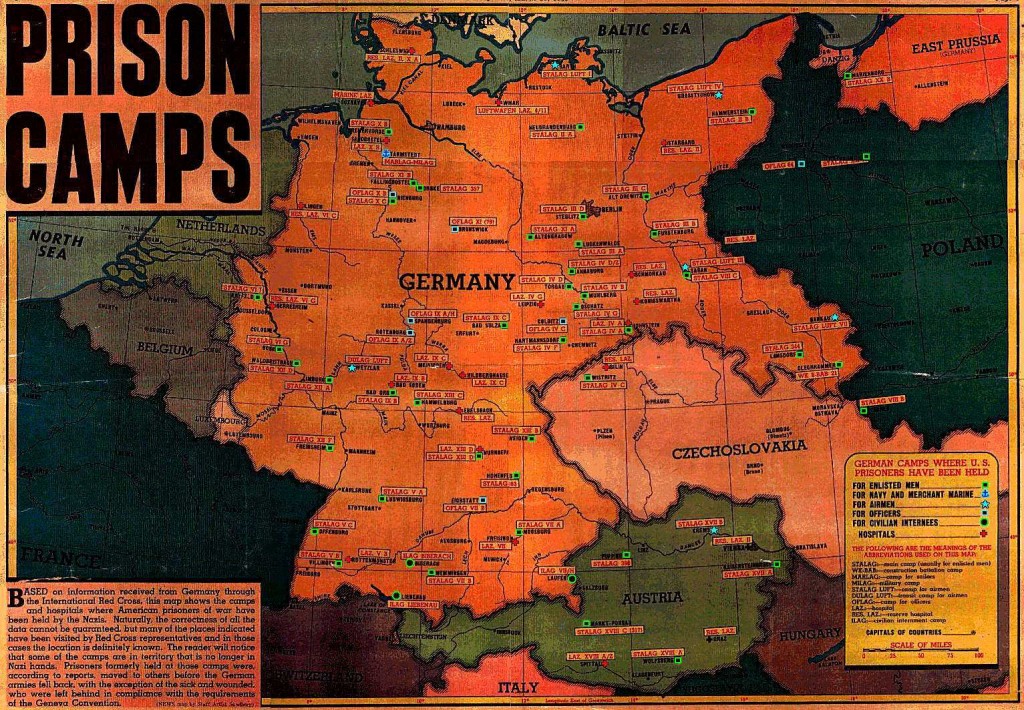 Description: Dulag Luft was the abbreviated name given to Prisoner of War (POW) transit camps for Air Force prisoners captured by Germany during the Second World War. Their main purpose was to act as collection and interrogation centres for newly captured aircrew, before being transferred in batches to the permanent camps. Dulag Luft derives from the German Durchgangslager der Luftwaffe (Transit Camp – Air Force).

Several camps where set up throughout Germany and the occupied countries, however the main centre used throughout the war was at Oberursel near Frankfurt. A satellite camp at Wetzlar was set up later in the war to help cope with the large numbers of aircrew captured as the bombing campaign intensified against Germany. Allegations of interrogation under torture have been made by numerous POWs who passed through the camps.

The Germans had established a similar facility, the “Listening Hotel”, in the First World War. This was located at 39 Ettlinger Strasse in Karlsruhe and was a former business hotel, the Europäischer Hof. The “Listening Hotel” should not be confused with the regular Officers’ Camp in Karlsuhe in that war.

Description: Oflag 64 was a World War II German prisoner-of-war camp for American officers located at Szubin, Poland, which at that time was occupied by Nazi Germany. It was probably the only German POW camp set up exclusively for U.S. Army officers,  although other camps holding several nationalities were usually divided into separate national compounds.

The camp was built around a Polish boys’ school by adding barracks. Initially it was Stalag XXI-B for Polish soldiers until December 1940. Then it became Oflag XXI-B for French and British officers, subsequently for Soviet officers until June 1943. At that time they were all moved out to other camps, the Commonwealth flying personnel to Stalag Luft 3 Sagan, others to Oflag XXI-C Ostrzeszów.

Stalag POW Camps – In Germany, “stalag” was a term used for prisoner-of-war camps.

Description: Stalag Luft I was a German World War II prisoner-of-war camp near Barth, Western Pomerania, Germany, for captured Allied airmen. The presence of the prison camp is said to have shielded the town of Barth from Allied bombing. Approximately 9,000 airmen (7,588 American and 1,351 British and Canadian) were imprisoned there when it was liberated on the night of 30 April 1945 by Russian troops. On 30 April 1945 the prisoners were ordered to evacuate the camp in the face of the advancing Soviet Red Army, but refused. After negotiations between the Senior American Officer and the Kommandant, it was agreed that to avoid useless bloodshed the guards would go leaving the POWs behind. The next day, the first Russian troops arrived. Between 13-15 May the camp was evacuated by air in “Operation Revival”. The British POWs were returned directly to England, while the Americans were sent to “Camp Lucky Strike” north-east of Le Havre, France, before being shipped back to the United States.

Description: Stalag Luft III (Stammlager Luft, or POW Camp for Airmen #3) was a Luftwaffe-run prisoner-of-war camp during World War II that housed captured air force servicemen. It was in the German Province of Lower Silesia near the town of Sagan (now Żagań in Poland), 100 miles (160 km) southeast of Berlin. The site was selected because it would be difficult to escape by tunneling.

Description: The camp was opened in May 1944. In July of that year a military report was released which described such problems as inadequate shower facilities, unfit distribution of Red Cross parcels, and that prisoners complained about the food situation often. Two letters and four postcards were permitted per month. These letters were harshly censored forcing prisoners to tell families that they were being treated well and that there were no problems whatsoever. On February 6, 1945 some 8,000 men of the camp set out on would be called the “Black March”. The prisoners were given the remaining Red Cross parcels; you could carry as much as you could. The march from Gross Tychow lasted approximately 86 days. They were forced to march under guard about 15–20 miles (24–32 km) per day. There was much zigzagging, to escape the encroaching Soviet Red Army from the east. At one time, they traveled 40 miles, only advancing a few.

The treatment was very bad. The sick were mistreated when dysentery and diarrhea set in. The Germans could not be collaborated with. Some prisoners were bayoneted; others kicked and hit. Shelter was either a barn or under the stars, in the rain, snow, or whatever happened to be. As for the food, a bushel or two of steamed potatoes for a barn full of men was the best ever received at the end of a day. Often, the food was placed in the barn in the dark of night for the men to get what they could. Clothing was misfit being the most dominant, gathered from what they could; the German government provided no clothing. They carried two blankets, and an overcoat for bedding.

At this point, the average POW lost 1/3 of his body weight since capture. Water (often contaminated) POW’s drank from ditches beside the road or ate snow when available. Using cigarettes, watches, rings or whatever they had to trade with the farmers along the way, for food. However in doing so risking the farmers and the POW’s lives. The POW’s ate charcoal to help stop dysentery and every POW became infected with lice. Pneumonia, diphtheria, pellagra, typhus, trench foot, tuberculosis and other diseases ran rampant among the POW’s.

Description: The camp was built in 1939 and designated Stalag I-C. At first it held Polish POWs, then from 1940 also French and Belgians, and from 1941 Russians. In June 1943 it was renamed Stalag Luft VI and used to hold British and Canadian Air Force NCOs, and from February 1944, also Americans.

By July 1944 it housed 9,000 Allied airmen. When the Russian front approached, orders were given to move the prisoners to other camps further west. Most of the men were moved by train to Stalag XX-A in West Prussia, but some 900 were taken to the port of Memel, where they were put aboard the merchant ship Insterburg for a 60-hour journey to Swinemünde. After another train journey the men were force marched from Kiefheide, with many men being bayoneted or shot before they reached Stalag Luft IV in Gross Tychow. This march was one of the “Long Marches”.

After the camp came under Russian control it was renamed Gulag 3, and used to house German POWs and Lithuanian partisans and dissidents, remaining in use until 1948. Until 1952 it served as a civilian prison, before being demolished. In 1995 a museum was opened on the former camp grounds.

Description: Stalag VII-A was Germany’s largest prisoner-of-war camp during World War II, located just north of the town of Moosburg in southern Bavaria. The camp covered an area of 35 hectares (86 acres). It served also as a transit camp through which prisoners, including officers, were processed on their way to other camps. At some time during the war, prisoners from every nation fighting against Germany passed through it. At the time of its liberation on 29 April 1945, there were about 80,000 prisoners in the camp, mostly from France and the Soviet Union. Many others were billeted in Arbeitskommando working in factories, repairing railroads or on farms.

Description: The Americans occupied five compounds, each of which measured 175 yards by 75 yards and contained four double barracks 100 by 240 feet. The barracks were built to accommodate 240 men, but at least 4000 men were crowded into them after the first three months of occupancy. Each double barrack contained a washroom of six basins in the center of the building. The beds in the barracks were triple decked, and each tier had four compartments with one man to a compartment, making a total of 12 men in each group. Each single barrack had a stove to supply heat and cooking facilities for approximately 200 men. The fuel ration for the week was 54 pounds of coal. Because of the lack of heating and an insufficient number of blankets, the men slept two to a bunk for added warmth. Lighting facilities were very poor, and many light bulbs were missing at all times.

Aside from the nine double barracks used for housing purposes, one barrack was reserved for the infirmary and the medical personnel’s quarters. Half a barracks was the library, another half for the MOC and his staff, and half for the theater, a half for food distribution and a half for Red Cross food distribution and a half for the meeting room. In addition, one barrack was used as a repair shop for shoes and clothing. Four additional barracks were added in early 1944, but two other were torn down because they were considered by the Germans to be too close to the fence, thus making it possible for PWs to build tunnels for escape purposes. One of these buildings had been used a s a gymnasium, and the other chapel. Latrines were open pit type and were situated away from the barracks. 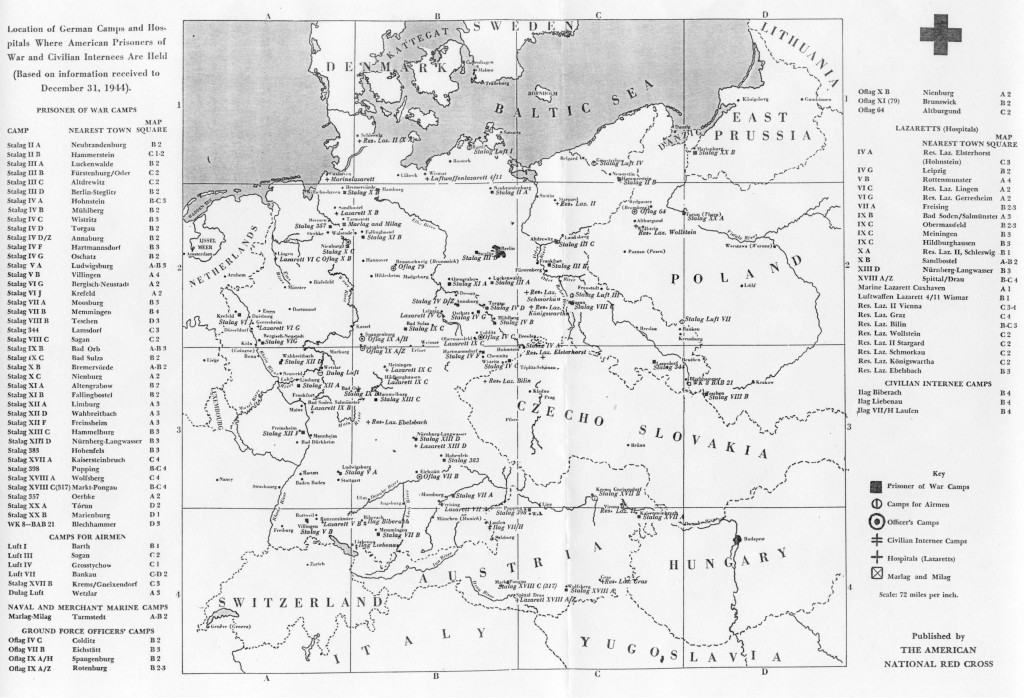